Watch out for this advice from the The Wall St Journal

Now we have another thing to watch out fore.  Informing the appraiser… 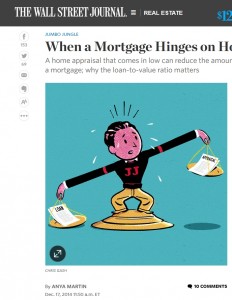 Low appraisals are rare for Bank of America ’s jumbo mortgages compared with two years ago, says John Schleck, senior vice president, centralized sales executive for Bank of America. “With rates this low and values pretty stable, it may be a good time for a borrower to step in before values go higher,” he adds.

If an appraisal does come in lower than expected, here are a few tactics a borrower can try:

• Inform the appraiser. While federal regulations forbid lenders from interacting directly with an appraiser, a refinancing homeowner can drop the needed loan amount into conversation during an appraiser visit, Mr. Carson says. Real-estate agents also can provide information about a property to the appraiser.

• Rebuttal. A last recourse is for the lender to file a rebuttal to the appraisal- management company, pointing out errors and suggesting alternate comparables. However, these rarely result in an amended appraisal, Mr. Carson says.

While a 2015 housing industry forecast released Dec. 3 by real estate site Trulia noted that the Great Recession is still casting a shadow over the housing market, it also revealed that three of five major measures for tracking housing health are getting back to normal.
1. Home price gains will slow but affordability will worsen
Price gains slowed in 2014 and Trulia predicted more of the same in 2015. The slowdown has been especially sharp in metros that had a severe housing bust followed by a big rebound. Now, prices nationwide are just 3 percent undervalued relative to fundamentals, which leaves fewer bargains and little room for prices to rise without becoming overvalued. Also, with consumers expecting 2015 to be a good year to sell a home, more properties could be foisted on the market and further cool prices. Despite slowing home price gains, affordability could worsen in 2015 because even small price increases could outpace income growth and because the strengthening economy could increase mortgage rates.
2. The rental market will stay strong
Rental supply will increase in 2015, and demand will stay strong, driven by young people moving out of their parents’ homes; recent job gains for 25-34 year-olds should lead to this rise in household formation. The 2014 apartment construction boom will mean more supply in 2015 as multifamily properties are completed. The expected surge of renters probably will cause the homeownership rate to fall.
3. Single-family starts and new home sales could disappoint
While apartment construction is breaking records, single-family housing starts and new home sales are still only half of normal levels — although they’re expected to improve in 2015. The vacancy rate for single-family homes is still near its recession high, which discourages new construction, but as the apartment construction boom has shown, when there’s demand, builders will build. The bottom line is that buyer demand for single-family homes hasn’t recovered enough to support near-normal levels of single-family starts or new home sales.

Before the mortgage meltdown and the resulting Great Recession, you paid a reasonable price for an appraisal, and your loan officer typically received a reasonable opinion of value that led to your purchase or refinance getting funded.

Not so much anymore. Swift and furious post-crisis reaction from regulators gave birth to the 2009 Home Valuation Code of Conduct or HVCC, and the federal Dodd-Frank Law, passed in 2010, (which made HVCC statutorily mute) making things far worse for you in terms of appraisal cost and resulting valuations.

Appraisal charges have gone up roughly 33%. “Appraisals were $375 before, and since HVCC the prices went up to $500,” said Yorba Linda, Calif., appraiser Myles Lawson.

The Federal Housing Finance Agency, the Consumer Financial Protection Bureau and the Appraisal Subcommittee – a federal agency that reviews state regulators of appraisers -could not point to any post-crisis publicly available data on appraisal accuracy when contacted for this column.

Ask any veteran loan originator. The No. 1 reason that transactions fall apart is low-ball appraisals, not tight credit standards. END_OF_DOCUMENT_TOKEN_TO_BE_REPLACED

I totally stand behind TSI appraisal and would recommend any appraiser looking to become an employee of one of the good AMCs out there to find out more about TSI Appraisal.

Check out the amazing benefits that you’ll get as a TSI Appraisal staff appraiser:

Find out more and complete our short appraisal evaluation at:
www.tsiappraisal.com/appraisers