Overall Economic Activity
Reports from the 12 Federal Reserve Districts indicated that the economy continued to expand from late November through the end of the year, with 11 Districts reporting modest to moderate gains and Dallas recording a robust increase. The outlook for 2018 remains optimistic for a majority of contacts across the country. Most Districts reported that non-auto retail sales expanded since the last report and that auto sales were mixed. Some retailers highlighted that holiday sales were higher than expected. Residential real estate activity remained constrained across the country. Most Districts reported little growth in home sales due to limited housing inventory. Nonresidential activity continued to experience slight growth. Most manufacturers reported modest growth in overall business conditions. Reports indicated that some manufacturers increased capital expenditures over the reporting period. Most reporting Districts noted continued growth in transportation activity. Loan volumes in many Districts were steady. Among reporting Districts, agricultural conditions were mixed and energy contacts described a slight uptick in activity.

END_OF_DOCUMENT_TOKEN_TO_BE_REPLACED

Well then you need the 2018 Appraisal Management Company Directory.

I took the time to rewrite most of the marketing information in the beginning of the book as well as add a bunch of AMCs that have been sending me good assignments over the past year.

You can order it here

posted in Appraiser News | Comments Off on Want to get some new clients in 2018?

Housing Will Continue to Gain Ground in 2018 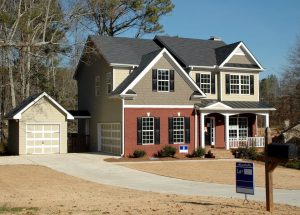 The newly enacted tax law will create a more favorable tax climate for the business community, which should spur job and economic growth and keep single-family housing production on a gradual upward trajectory in 2018, according to economists speaking at the NAHB International Builders’ Show® in Orlando, Fla., today.

“We expect that tax reform will boost GDP growth to 2.6 percent in 2018, and this added economic activity will also bode well for housing, although there will be some transition effects in high-tax jurisdictions,” said NAHB Chief Economist Robert Dietz. “Ongoing job creation, expected wage increases and tight existing home inventory will also boost the housing market in the year ahead.”

END_OF_DOCUMENT_TOKEN_TO_BE_REPLACED

The Federal Trade Commission announced Jan. 10 that it will hear oral arguments next month on motions filed by the FTC and the Louisiana Real Estate Appraisers Board. The LREAB in November filed a motion to dismiss the complaint filed against it by the FTC, while the FTC filed motions for partial summary judgment and for opposition to the LREAB’s motion to dismiss.

END_OF_DOCUMENT_TOKEN_TO_BE_REPLACED

Get the updated 2018 AMC Directory Today

I got this one out a little late, sorry about that!  Must apply today or tomorrow at the latest.

END_OF_DOCUMENT_TOKEN_TO_BE_REPLACED

2017 Voice of the Appraiser Report

Anyone else use boomerang with their Gmail accounts?  Well this has been bouncing back to me almost every week since November.

I have meant to make a post about it because everyone doesn’t know about it.  You can get it here. 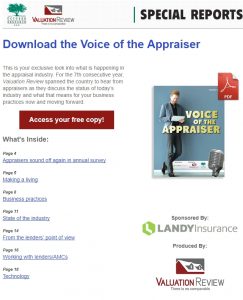 A couple things I found interesting is that most of the appraisers surveyed in 2011 had typical fees of $300-400 an appraisal, that was the same number on the 2016 survey and increased to $400-500 in 2017 with almost an equal amount in the $300-400 and More than $500 responses.  That is great news as we are seeing the under $300 per appraisal fees slip away.  Those AMCs are a bunch of dirt bags that still try to charge under $300 an appraisal.   Don’t work for them! END_OF_DOCUMENT_TOKEN_TO_BE_REPLACED